Home > Blog > Is there a big difference between a cast iron bed and a welded bed, and what should customers choose?
Return list

Is there a big difference between a cast iron bed and a welded bed, and what should customers choose?

At present, the bed of mainstream fiber laser cutter on the market is generally divided into two types: cast iron bed (integrated), welding bed (tube sheet welding). Because the price of laser cutting machine is relatively high, consumers will often be entangled when choosing, for fear that the wrong choice will lead to greater losses.

Some people say that thecast iron bedis chosen because of its high quality and long service life;

So what’s the difference between the two? How should consumers choose?

The cast iron bed is habitually called an integral cast iron bed in the industry. It is made of flake graphite cast iron with a minimum tensile strength of 200MPa as the raw material and is cast at a high temperature as a whole. After multiple strict thermal aging and natural aging, it forms a bed body with ultra-high stability. 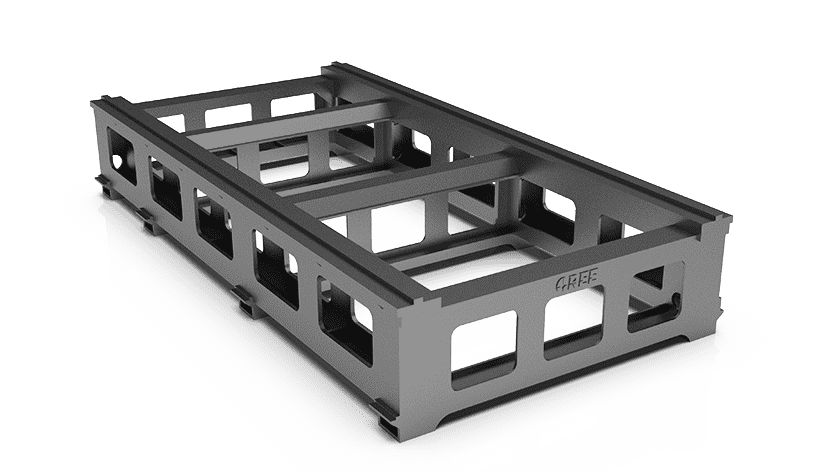 Some readers may not have a special understanding of the raw materials of the laser cutterbody, Oreelaser will explain in detail for everyone:

Cast iron is one of the earliest metal materials used in human society. Due to the low cost of early cast iron, the production process is simple and has excellent casting and cutting performance. It is still one of the most important materials in machinery manufacturing.

According to the form of carbon in cast iron, cast iron can be divided into 5 categories:

● Effect of graphite on properties of cast iron

After the above treatment, HT has high material stability, which is unmatched by other materials and structures. The use of graphite cast iron as the raw material keeps the accuracy of the machine tool for a long time, unchanged for 50 years.

The overall dynamic performance of the laser cutting machinetool is stable, the equipment has good stability, long life, and effectively reduce machining errors caused by bed vibration, reduce material waste, and save direct costs for users.

The laser cutting machine of the tailor-welded structure is welded by steel plates as its name implies. During the welding processing, the local structure of the material changes, and due to the heat and unevenness of the entire component, the material and structural stress are more serious. And it can not be eliminated after strict heat treatment procedures. As a result, during the processing , assembly and use of the machine tool, its linear accuracy will inevitably produce slight fluctuations.

From the above point of view, if you want higher cutting accuracy, longer service life, and lower long-term production costs, you must choose a cast iron bed; the specific configuration of the bed also needs to be based on your own needs.

Submit
PREVIOUS Application advantages of laser cutting technology in automobile manufacturing
Is it better to use aluminum beam or steel beam for laser cutting machine? NEXT